Dryads (or “female tree spirits”) are nymphs associated with Greek mythology and Hinduism, which live near or in trees. 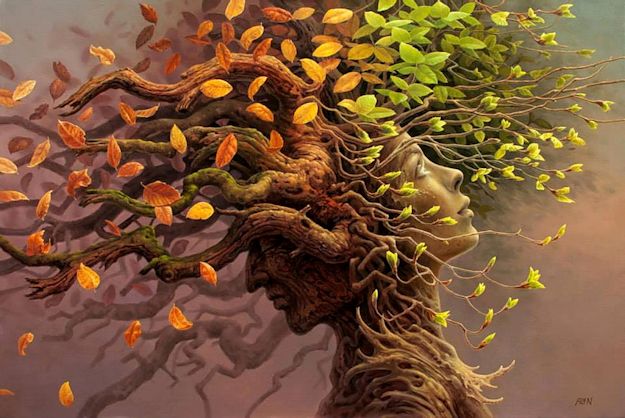 Dryads are born bonded to a specific tree, originally, in the Indo-European Celtic-Druidic culture, an oak tree.

Drys in Greek signifies ‘oak,’ from an Indo-European root *derew(o)- ‘tree’ or ‘wood.’ 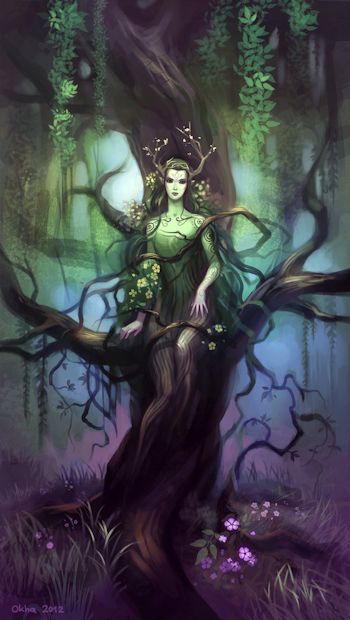 Nymphs associated with apple trees were the Epimeliad.

The dryads of ash trees were called the Meliai. The ash-tree sisterhood tended the infant Zeus in Rhea’s Cretan cave. Rhea had born the Meliai herself, made fertile by the cast-away blood from the castration of Uranus (Ouranos to the Romans).

If the dryad nymphs lived in the trees, they were referred to as hamadryads, like Atlantia, one of the wives of Danaus. Otherwise, they were simply dryads.

Dryads, like all nymphs were supernaturally long-lived, but if the tree died, the hamadryad associated with it died as well. For that reason, dryads and the Greek gods punished any mortals who harmed trees without first doing something to please the tree-nymphs or offering sacrifices to them.

Daphne, who was pursued by Apollo, became a dryad associated with the laurel.

They were normally considered to be very shy creatures, except around the goddess Artemis, who was known to be a friend to most nymphs.

Pitys was an Oread nymph who was pursued by Pan. She was changed into a pine tree by the gods in order to escape him.

Atlanteia and Phoebe, two of the many wives and concubines of Danaus, were dryads. 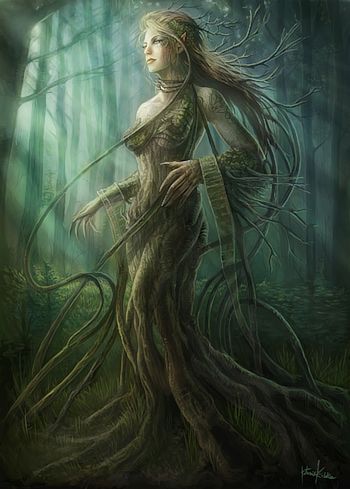 Chrysopeleia was a Hamadryad nymph. The tree in which she lived was in danger from the waters of a flooding river. She was rescued by Arcas, who happened to be hunting nearby. He rerouted the river and secured the tree with a dam. Eventually, Chrysopeleia became his lover and bore him two sons, Apheidas and Elatus.

Dryope was the daughter of Dryops, king of Oeta (“oak-man”) or of Eurytus (and half-sister to Iole). She was sometimes thought of as one of the Pleiades (and hence a nymph). There are two stories of her metamorphosis into a black poplar.

According to the first, Apollo seduced her by a trick. Dryope had been accustomed to play with the hamadryads of the woods on Mount Oeta. Apollo chased her, and in order to win her favors turned himself into a tortoise, which the girls made into  a pet.

When Dryope had the tortoise on her lap, Apollo then turned into a snake. She tried to flee, but he coiled around her legs and held her arms tightly against her sides as he raped her. The nymphs then abandoned her, and she eventually gave birth to her son Amphissus.

She later married Andraemon. Amphissus eventually built a temple to his father Apollo in the city of Oeta, which he founded. Here the nymphs came to converse with Dryope, who had become a priestess of the temple, but one day Apollo again returned in the form of a serpent and coiled around her while she stood by a spring. This time Dryope was turned into a poplar tree.

In another version of the story, Dryope was wandering by a lake, suckling her baby Amphissus, when she saw the bright red flowers of the lotus tree, formerly the nymph Lotis who, when fleeing from Priapus, had been changed into a tree. 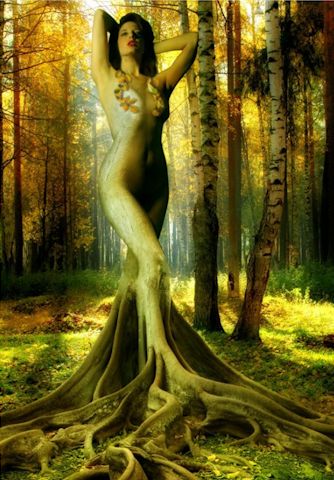 Dryope wanted to give the blossoms to her baby to play with, but when she picked one the tree started to tremble and bleed. She tried to run away, but the blood of the tree had touched her skin and she found her feet rooted to the spot.

She slowly began to turn into a black poplar, the bark spreading up her legs from the earth, but just before the woody stiffness finally reached her throat and as her arms began sprouting twigs her husband Andraemon heard her cries and came to her.

She had just enough time to warn her husband to take care of their child and make sure that he did not pick flowers. She also told him to find Amphissus a nurse and to tell him to call her his mother.

Erato, priestess and prophetess of the god Pan, was a dryad. She was married to Arcas, the son of Zeus and Callisto, and bore him three sons, Azan, Apheidas, and Elatus.

Eurydice was an oak nymph and one of the daughters of Apollo, the god of music. She was the wife of Orpheus. On their wedding day, he played joyful songs as his bride danced through the meadow.

One day, Aristaeus saw and pursued Eurydice, who stepped on a viper, was bitten, and died instantly.

Distraught, Orpheus played and sang so mournfully that all the nymphs and deities wept and told him to travel to the Underworld to retrieve her, which he gladly did. After his music softened the hearts of Hades and Persephone, his singing so sweet that even the Erinyes wept, he was allowed to take her back to the world of the living. 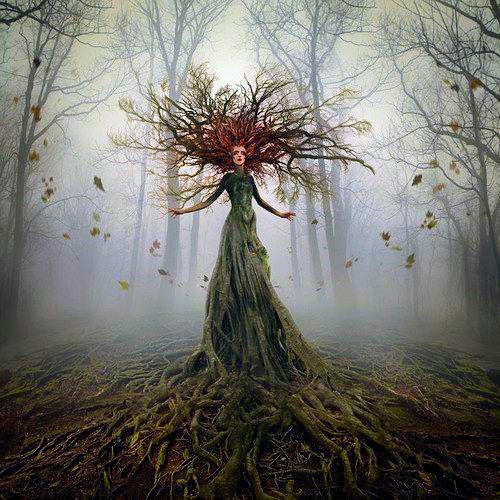 In another version, Orpheus played his lyre to put Cerberus, the guardian of Hades, to sleep, after which Eurydice was allowed to return with Orpheus to the world of the living.

In both versions a condition was attached that he must walk in front of her and not look back until both had reached the upper world. Soon he began to doubt that she was there, and that Hades had deceived him. Just as he reached the portals of Hades and daylight, he turned around to gaze on her face, and because Eurydice had not yet crossed the threshold, she vanished back into the Underworld.

When Orpheus later was killed by the Maenads at the orders of Dionysus, his soul ended up in the Underworld where he was reunited with Eurydice.

Other ancient writers, however, speak of Orpheus’ visit to the underworld in a more negative light. In fact, Plato’s representation of Orpheus is that of a coward; instead of choosing to die in order to be with the one he loved, he mocked the deities by trying to go to Hades to get her back alive. Since his love was not “true” — meaning he was not willing to die for it — he was punished by the deities, first by giving him only the apparition of his former wife in the underworld and then by being killed by women.

The story of Eurydice may be a late addition to the Orpheus myths. In particular, the name Eurudike (“she whose justice extends widely”) recalls cult-titles attached to Persephone. The myth may have been derived from another Orpheus legend in which he travels to Tartarus and charms the goddess Hecate.

The story of Eurydice has strong universal cultural parallels from the Japanese myth of Izanagi and Izanami, the Mayan myth of Itzamna and Ixchel, the Indian myth of Savitri and Satyavan, to the Akkadian/Sumerian myth of Inanna’s descent to the underworld.