Poseidon, god of the sea

Poseidon, god of the sea

Poseidon was the god of the sea and, as “Earth-Shaker,” of earthquakes in Greek mythology. Poseidon has many children. There is a Homeric hymn to Poseidon, who was the protector of many Hellenic cities, although he lost the contest for Athens to Athena.

Poseidon was a son of Cronus and Rhea. In most accounts he is swallowed by Cronus at birth but later saved, with his other brothers and sisters, by Zeus. However in some versions of the story, he, like his brother Zeus, did not share the fate of his other brother and sisters who were eaten by Cronus.

He was saved by his mother Rhea, who concealed him among a flock of lambs and pretended to have given birth to a colt, which she gave to Cronus to devour.

According to a single reference in the Iliad, when the world was divided by lot in three, Zeus received the sky, Hades the underworld and Poseidon the sea. In the Odyssey (v.398), Poseidon has a home in Aegae.

Poseidon was a major civic god of several cities: in Athens, he was second only to Athena in importance, while in Corinth and many cities of Magna Graecia he was the chief god of the polis. In his benign aspect, Poseidon was seen as creating new islands and offering calm seas.

When offended or ignored, he supposedly struck the ground with his trident and caused chaotic springs, earthquakes, drownings and shipwrecks. Sailors prayed to Poseidon for a safe voyage, sometimes drowning horses as a sacrifice.

According to Pausanias, Poseidon was one of the caretakers of the oracle at Delphi before Olympian Apollo took it over. Apollo and Poseidon worked closely in many realms: in colonization, for example, Delphic Apollo provided the authorization to go out and settle, while Poseidon watched over the colonists on their way, and provided the lustral water for the foundation-sacrifice.

Xenophon’s Anabasis describes a group of Spartan soldiers in 400–399 BCE singing to Poseidon a paean — a kind of hymn normally sung for Apollo. 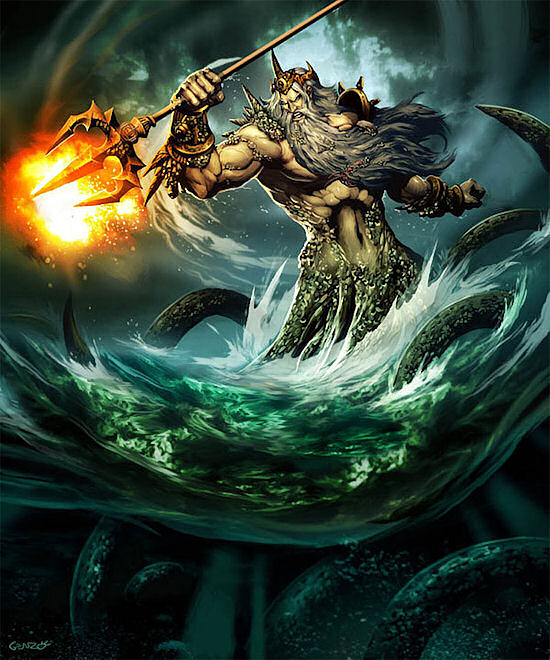