Britomartis is the Goddess of mountains and hunting. She is also the Goddess of water, making her also a Moon Goddess. Her name means “Sweet Maiden”. Her sacred flower is the Lily, and she has a genus of butterfly named for her.

In Greek mythology, Britomartis (“sweet maid”, “good maiden”, “sweet virgin”) was a nymph (an Oread) also known as Aphaea and Diktynna. She was also associated with Potnia and Artemis. Britomartis was worshipped as the Minoan goddess of mountains and hunting. 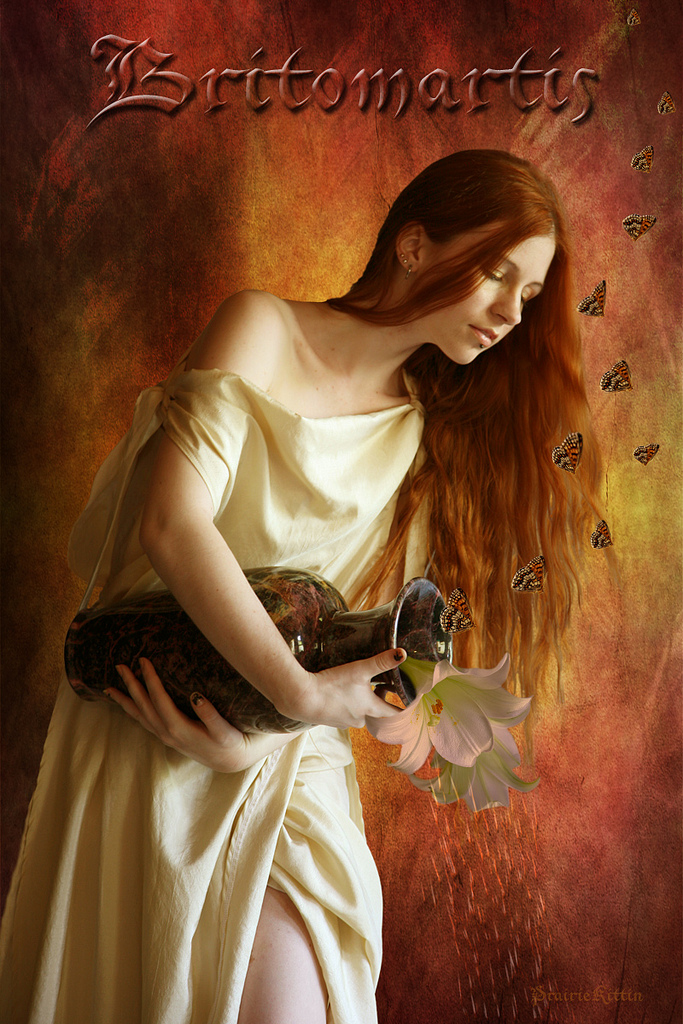 Photo courtesy of Marcus RanumBritomartis was a daughter of Carme, the daughter of Euboulos, by Zeus. She was pursued by Minos and threw herself into nets to escape him. Artemis made her a goddess (here named Diktynna), patron of mountains, shores, nets and ports. Alternatively, she fled to Aegina, where she was worshipped as Aphaea.

In Minoan art, and on coins, seals and rings and the like throughout Greece, Britomartis is depicted with demonic features, carrying a double-handed axe and accompanied by feral animals.

In Chersonesos and Olous, she was often portrayed on coins and was heavily worshipped in those cities; the festival Britomarpeia was held in her honor.

As Diktynna, her face was pictured on Cretan coins of Kydonia, Polyrrhenia and Phalasarna as the nurse of Zeus. On Crete, she was connected with the mountain where Zeus was said to have been born–Mt. Dikte.

Though temples existed to her in Athens and Sparta, she was primarily a goddess of local importance in Western Crete, such as Lysos and West of Kydonia. Her temples were said to be guarded by vicious dogs stronger than bears.

As Aphaea, Britomartis was worshipped primarily on the island of Aegina in Mycenaean times, where the temple “Athena Aphaea” was later located. A temple to her also existed on the outskirts of Athens, at the Aspropirgos.

Many scholars believe that Britomartis was the name of a Minoan deity, who later diversified into Aphaea on Aegina and Diktynna in Western Crete. Eventually, both goddesses were subsumed into the cult of Artemis.

As Britomart, she figures in Edmund Spenser’s knightly epic The Faerie Queene, where she is an allegorical figure as the virgin Knight of Chastity, representing English virtue in particular English military power in association Brit- and Mars (Martis here thought as of Mars, the Roman war god), connotating the Virgin Queen, Elizabeth I of England.