Lilly, a 6-month old black and white house cat with four ears, is healthy and can hear perfectly well — but only through the front pair. A four-eared German kitten has been given a new home after a German animal shelter was deluged with requests to adopt the animal born six months ago with the genetic defect. 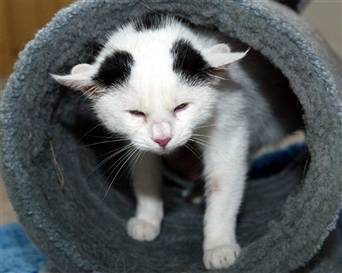 We wanted to make sure the people were looking for a normal cat and not a gag to make an exhibition out of her, Enrico Schlag, a worker at the Garmisch-Partenkirchen animal shelter, said Thursday.

We’ve found a completely normal family for her that has already adopted cats from us in the past.

The shelter in the foothills of the Alps in southern Germany received dozens of calls after local media published pictures of Lilly.

Reuters, which reported the kittens search for a home Wednesday, also received numerous offers from readers around the world eager to adopt her or make donations to the shelter.

Tessy Loedermann, head of the shelter, said Lilly will first be neutered and held at the shelter for another two weeks.

Loedermann said the black-and-white cat with the extra set of ears was not a freak but rather an energetic, loving and well-adjusted kitten.

Lilly, born on a farm near the winter resort town famous for hosting the 1936 Winter Olympics, has an extra pair of slightly smaller, nonhearing ears just behind the normal two. Vets have attributed the phenomenon to a gene malfunction.

The front ears are completely normal while the two ears directly behind them are about half the size and not fully developed, Schlag said.

She was given to the shelter last week because the family had more cats than they could care for.

Were trying to treat her as a completely normal kitten and the other cats here have played with her in a normal manner as well, Schlag said. She hasnt been ostracized by the other cats at all. Shes a bundle of energy but likes to be cuddled.