A low-grade spotting black-and-white bicolor cat is often known as a “tuxedo cat” or a “Billicat.” To be considered a tuxedo cat, a cat’s black coloring should be solid throughout, with white fur limited to the paws, belly, chest, throat, face, and possibly the chin: it should appear as if the cat were wearing a tuxedo.

A tuxedo cat is a bicolor cat with a white and black coat. 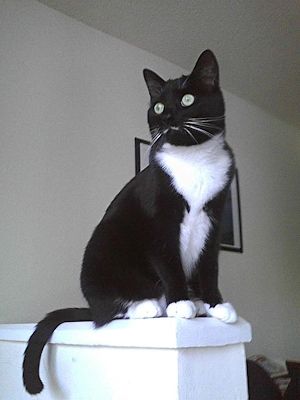 They are called, “tuxedo” cats, because the animal appears to be wearing the type of black tie formal wear commonly known in the United States and Canada as a tuxedo. Most tuxedo cats are also black mask cats, a common name for felines who, due to their facial coloration, look as if they are wearing a black mask over their eyes, and often over their entire head.

To be considered a true tuxedo cat, the feline’s coloring should consist of a solid black coat, with white fur limited to the paws, belly, chest, throat, and often the chin, although many tuxedo cats appear to sport goatees, due to the black coloration of their mandible — that is, the lower jaw and chin. Bicolor may also appear in the skin color. Paw pads may be black or pink. Bicoloring of the nose and mouth are also common.

In the United Kingdom, the tuxedo cat is sometimes known as the “Jellicle cat” 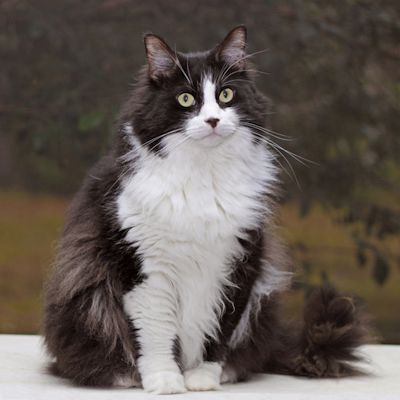 In the United Kingdom, the tuxedo cat is sometimes known as the “Jellicle cat”, after the fictional tribe of black and white cats described by T. S. Eliot in Old Possum’s Book of Practical Cats

, which was first published in 1939. In its derivative Broadway musical, Cats, the tuxedo cat is exemplified by the character of the magical Mr. Mistoffelees, who is portrayed as a stage magician wearing a lacy ruff and bow tie.

The musical differed from the book in that the characters included cats with many different coat colors, rather than just bicolor cats, but it retains the repeated assertion that “Jellicle cats are black and white.” Cats with these markings also played a starring role in the drawings illustrating The Unadulterated Cat, a book written by Terry Pratchett, with cartoons by Joliffe Gray.

Other well known cartoon bicolor cats include Felix the Cat, Tom from Tom and Jerry, Figaro and Sylvester. A bicolor cat named Mittens is one of the main characters in the 2008 Disney animated film “Bolt”.