Have you ever seen an uglier baby bird?

Have you ever seen an uglier baby bird? 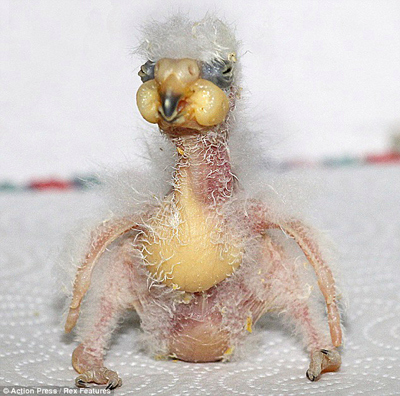 However, he can at least take some comfort in the knowledge that he will one day grow up to be an attractive Kea parrot.

As such, the youngster is now being cared for around the clock by staff and spent the first four weeks of his life in an incubator.

Keas are large parrots native to the alpine regions of New Zealand that are known for their intelligence and curiosity.

But his looks won’t last forever…

Nelson, who has been described as looking like a cross between an alien and a roast chicken, was born last month at Bergzoo in Germany.

Adult Kea Parrots grow to be about 19″ long ( 48 cm ). The Adults are mostly olive-green with a brilliant orange flash under their wings, and they have a large, narrow, curved, grey-brown upper beak. The feathers on the sides of its face are dark olive-brown, feathers on its back and rump are orange-red, and some of the outer wing wing are dull-blue. It has a short, broad, bluish-green tail with a black tip. Feather shafts project at the tip of the tail and the undersides of the inner tail feathers have yellow-orange transverse stripes.

In the wild, they nest in burrows on the ground or in crevices among the roots of trees.

The kea is the world’s only alpine parrot.

Now uncommon, the kea was once killed for bounty due to concerns by the sheep-farming community that it attacked livestock, especially sheep. It is now a protected species.

The kea ranges from lowland river valleys and coastal forests of the South Island’s west coast up to the alpine regions of the South Island such as Arthur’s Pass and Aoraki/Mount Cook National Park, closely associated throughout its range with the southern beech (Nothofagus) forests in the alpine ridge. Apart from occasional vagrants, kea are not found in the North Island, although fossil evidence suggests a population lived there over 10,000 years ago.

The Kea parrots have been filmed preparing and using tools.

Kea parrots are known for their intelligence and curiosity, both vital to their survival in a harsh mountain environment. Keas can solve logical puzzles, such as pushing and pulling things in a certain order to get to food, and will work together to achieve a certain objective. 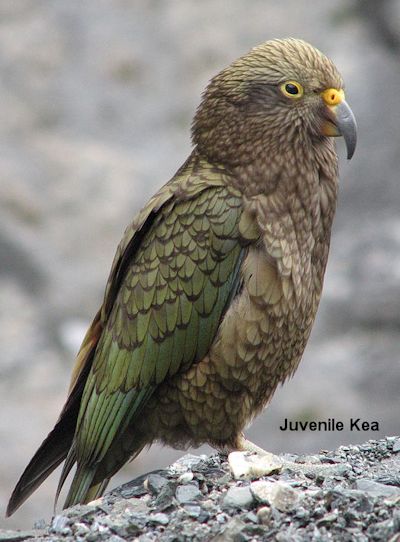 The kea’s notorious urge to explore and manipulate makes this bird a pest for residents and an attraction for tourists. Called “the clown of the mountains,” it will investigate backpacks, boots, skis, snowboards, and even cars, often causing damage or flying off with smaller items.

People commonly encounter wild kea at South Island ski areas, where they are attracted by the prospect of food scraps. Their curiosity leads them to peck and carry away unguarded items of clothing or to pry apart rubber parts of cars — to the entertainment and annoyance of human observers. They are often described as “cheeky.” A kea has even been reported to have made off with a Scottish man’s passport while he was visiting Fiordland National Park.

Some people believe that the unbalanced diet resulting from feeding kea human foods has a detrimental effect on the birds’ health. The Department of Conservation suggests that the time savings resulting from a more calorie-rich diet will give the kea more free time to investigate and hence damage things at campsites and car parks.

Kea have been kept as pets before being protected, but rarely, since they were difficult to capture and destructive when in captivity.

Kea are social and live in groups of up to 13 birds. Isolated individuals do badly in captivity, but respond well to mirror images. In captivity, this bird is fond of butter, nuts, apples, carrots, grapes, mangoes, figs, bread, dairy products, ground meat, and pasta.

In the wild they are omnivores which eat more than 40 plant species, plus beetle larva, other birds (including shearwater chicks), and mammals (including sheep and rabbits). It has been observed breaking open shearwater nests to feed on the chicks after hearing the chicks in their nests.

Lifespan of the Kea Parrot 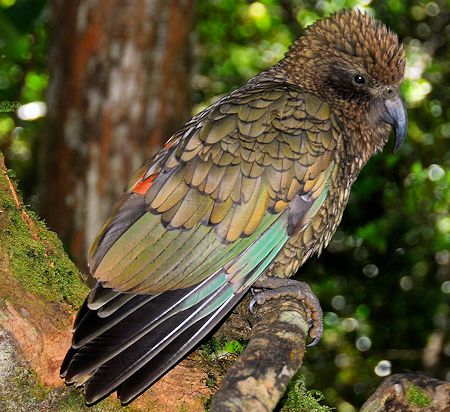 Mortality is high among young kea, with less than 40% surviving their first year. The median lifespan of a wild subadult kea has been estimated at five years, based on the proportion of kea seen again in successive seasons in Arthur’s Pass, and allowing for some emigration to surrounding areas. Around 10% of the local kea population were expected to be over 20 years of age. The oldest known captive kea was 50 years old in 2008.