As you can see from the photograph, the Achilles Tang is very distinctive with its black body, large bright orange spot, and other white and orange markings. It is hard to mistake this fish for any other.

The Achilles Tang is a common fish found in Hawaiian waters, but the distribution of this species extends from Hawaii southward to central Polynesia and westward through Micronesia and Melanesia, but it apparently does not extend to the Philippine Islands, the East Indies, and the Indian Ocean. Phylum: Chordata 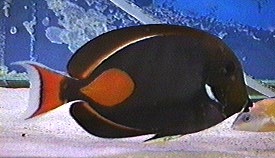 The most significant feature of Acanthuridae family members is the presence of spines on the sides of the caudal peduncle. Each side bears either a single, sharp, hinged spine, or one or two immobile, keel-like, razor sharp plates. This family uses these spines as a means of protection by rubbing or brushing up against their aggressors in a quick sideways motion. Extreme caution should be used when handling this fish family. The characteristic razor sharp spines can inflict deep cuts or wounds, especially from that of larger specimens. The potential for minor or serious infections to arise from a cut or wound to ones self warrants paying close attention to them and treating them properly.

Members of this family generally remain small or medium in size, with a few adult species reaching larger sizes to about 15 inches. However, the Unicornfishes (named for the single horn-like spine on the front of their heads) reach an average length of 15 to 20 inches, with the Naso unicornis species sometimes growing to 24 inches.

Tangs and Surgeonfishes generally do not get along well with fish of the same species or sex, especially when kept in a small aquarium system. Some species will often pick on other nonrelated fishes that are similar in shape, color, size, and behavior. Most are best kept singly with other single non-related species. Because of the somewhat aggressive nature of these fish, most are best kept in a moderately-aggressive to aggressive fish species tank community.

Depending on an individual fish's average size, a large enough aquarium with ample room to move around and lots of places to hide to keep away from other fish are best for their well being. If you have a Tang or Surgeonfish that has been a long time resident in an aquarium, and later you add another or several new fish of the same or similar species, stand back and watch the fighting begin. If you do try to keep several of the same or multiple species together, it is helpful to introduce them into the aquarium all at the same time.

Family Acanthuridae fishes are rather susceptible to contracting both forms of saltwater Ich, and for Yellow Tangs in particular, Blackspot Ich. They are also fishes most often affected by HLLE (Head and Lateral Line Erosion).

Tangs and Surgeonfishes are herbivores that in nature live upon various types of alga that thrive in the more sun lit shallower waters of the reef. They have unusually long digestive tracts to digest the plant matter they consume. These fish are constant feeders and spend most of their day grazing. A habitat with an ample growth of algae present is best for them, which in turn helps to keep the algae in an aquarium cropped and in check.

If the aquarium does not have a plentiful source of algae, these fish can be fed a varied diet of dried and frozen herbivore foods that contain marine algae and the blue-green alga Spirulina.

Their diet can also be supplemented with fresh vegetables such as broccoli, zucchini and leaf lettuce, best fed by partially freezing and then thawing it before feeding, or by blanching it. This helps to break down the fibrous content of the vegetables and enables the fish to digest them more easily.

Sushi nori (natural dried seaweed) is also a good supplemental food source, and some Tang & Surgeonfish species will occasionally pick at meaty fares as well. Periodically soaking foods in selcon or another type of liquid vitamin helps to provide important vitamin replace that may not be completely obtained from some tank fed fares.