The weird creature known as the Jersey Devil has been roaming the pine barrens of New Jersey since 1735. Sightings are still regularly reported today. It has been estimated that more than 2,000 witnesses have spotted the strange Jersey Devil creature in recent times.

Panic over alleged sightings has sent terror through towns and has even caused schools and factories to temporarily shut down.

Description of the Jersey Devil 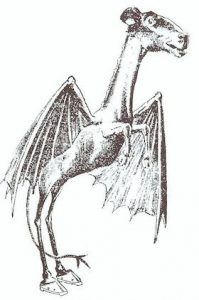 Here are some eye-witness accounts of this strange creature:


(from an eyewitness): “It was about three-and-a-half feet high, with a head like a collie dog and a face like a horse. It had a long neck, wings about two feet long, and its back legs were like those of a crane, and it had horse’s hooves. It walked on its back legs and held up two short front legs with paws on them.”

Encounter (from Strange Magazine Online): “A Mr. and Mrs. Nelson spotted the animal cavorting on their shed for ten straight minutes; police officers filed reports of shooting at it; and even a Trenton city councilman (name withheld in the source material) claimed an encounter. He had heard a hissing sound at his doorstep late one night. When he opened the door, he found cloven hoofprints in the snow. These bizarre footprints were turning up all over the New Jersey, Philadelphia, and Delaware region. Animal mutilations, occurring at random throughout the area during the week, were blamed on the Jersey Devil.”