Pterosaurs may not be extinct

Pterosaurs may not be extinct

Pterosaurs were thought to have gone extinct with the dinosaurs 65 million years ago. But there have been many sightings of strange creatures resembling them in modern times. 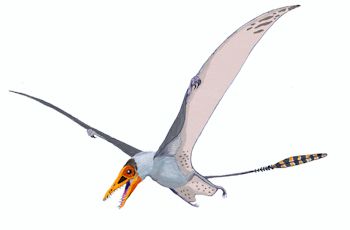 The earliest pterosaurs appeared sometime in the Late Triassic, about 230 million years ago. Pterosaurs preceded birds by 75 million years, and bats by 150 million years. Pterosaur remains have been found in all the world’s continents including Antarctica.

Pterosaurs were the largest creatures to ever attain flight. With wingspans reaching nearly 40 feet, pterosaurs ruled the prehistoric skies for over 100 million years, until they died out with the dinosaurs about 65 million years ago.

There have been many modern-day sightings of creatures that by eyewitness description sound like pterosaurs. There are also intriguing rock carvings and even photographs that suggest that this species of amazing flying monsters could have survived extinction, could have soared through the skies of the southwestern United States until very recently, and might still exist in small numbers in remote parts of the world.

Pterosaurs were not dinosaurs, but a family of large flying reptiles (“pterosaur” means “winged lizard”) that includes the pterodactyl and pteranodon. The pterosaur stood on two rather spindly legs and had wings composed of a leathery membrane that stretched from the animal’s extremely long fourth finger to its body. Despite their appearance, they were not related to birds (as dinosaurs are theorized to be), and were highly successful flyers that might have dined on fish and insects.

May, 1961, New York State – A businessman flying his private plane over the Hudson River Valley claimed that he was “buzzed” by a large flying creature that he said “looked more like a pterodactyl out of the prehistoric ages.”

Early 1960s, California – A couple driving through Trinity National Forest reported seeing the silhouette of a giant “bird” that they estimated to have a wingspan of 14 feet. They later described it as resembling a pterodactyl.

January, 1976, Harlingen, Texas – Jackie Davis (14) and Tracey Lawson (11) reported seeing a “bird” on the ground that stood five feet tall, was dark in color with a bald head and a face like a gorilla’s with a sharp, six-inch-long beak. A subsequent investigation by their parents uncovered tracks that had three toes and were eight inches across.

February, 1976, San Antonio, Texas – Three elementary school teachers saw what they described as a pterodactyl swooping low over their cars as they drove. They said its wingspan was between 15 and 20 feet. One of the teachers commented that it glided through the air on huge, bony wings – like a bat’s.

September, 1982, Los Fresnos, Texas – An ambulance driver named James Thompson was stopped while driving on Highway 100 by his sighting of a “large birdlike object” flying low over the area. He described it as black or grayish with a rough texture, but no feathers. It had a five- to six-foot wingspan, a hump on the back of its head, and almost no neck at all. After consulting some books to identify the creature, he decided it most looked like a pterosaur.

Another fascinating tale of a pterosaur literally coming out of stone dates back to 1856 in France. Workmen were digging through Jurassic-era limestone for a railway tunnel between the St.-Dizier and Nancy lines. When a large bolder of limestone was split open, the workers were astonished to see a large winged creature come stumbling out. They said it fluttered its wings, let out a croaking noise and then dropped dead at their feet. The creature had thick black, leathery skin, a beak full of sharp teeth, long talons for feet, and membrane-like wings that spanned 10 feet, 7 inches, by their measure.

The body of the creature was taken to the nearby town of Gray, according to the story, where it was identified as a pterodactyl by a student of paleontology. As reported in the Illustrated London News of February 9, 1856, the rock in which the creature had apparently been entombed for millions of years, contained a precise mold of its body.

One bizarre theory is that these sightings are artifacts of a slip in time – either a look into the distant past, or that some of these flying monsters have passed through some time portal to our present day.