The Aye-Aye is a strange primate native to Madagascar

The Aye-Aye is a strange primate native to Madagascar

The Aye-Aye is a strange looking primate in the lemur family that is native to Madagascar.The Aye-Aye has rodent-like teeth and a special thin middle finger which fills the same ecological niche as a woodpecker.

It is the world’s largest nocturnal primate, and is characterized by its unusual method of finding food. The Aye Aye taps on trees to find grubs, then gnaws holes in the wood using its forward slanting teeth to create a small hole into which it inserts its narrow middle finger to pull the grubs out.

The only other animal species known to find food in this way is the striped possum.

Just what is an Aye-Aye? 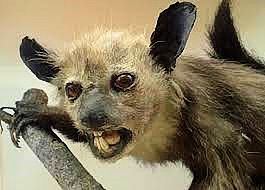 Due to its strange features, the classification of the aye-aye has been debated since its discovery. The possession of continually growing incisors (front teeth) parallels those of rodents, leading early naturalists to mistakenly classify the aye-aye within the mammalian order Rodentia, and as a squirrel, due to its toes, hair coloring, and tail. However, the aye-aye is also similar to felines in its head shape, eyes, ears and nostrils.

The aye-aye's classification with the order Primates has been just as uncertain. The aye-ayes are also similar to lemurs in their shorter back legs, and are related through a common ancestor.

Anatomy of the Aye-Aye

Young aye-ayes typically are silver colored on their front and have a stripe down their back. However, as the aye-ayes begin to reach maturity, their bodies will be completely covered in thick fur and are typically not one solid color. On the head and back, the ends of the hair are typically tipped with white while the rest of the body will ordinarily be a yellow and/or brown color. 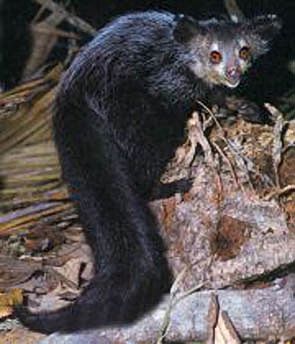 In length, a full-grown aye-aye is typically about three feet long with a tail as long as its body. Among the aye-aye's signature traits are its fingers. The third finger, which is thinner than the others, is used for tapping and grooming, while the fourth finger, the longest, is used for pulling bugs out of trees.

The complex geometry of ridges on the inner surface of aye-aye ears helps to sharply focus not only echolocation signals from the tapping of its finger, but also to passively listen for any other sound produced by the prey. The aye-aye is thought to be the only primate which uses echolocation to find its prey.

Aye-ayes tap on the trunks and branches of the trees they visit up to eight times per second, and listen to the echo produced to find hollow chambers inside. Once a chamber is found, they chew a hole into the wood and get grubs out of that hole with their narrow and bony middle fingers.

Females have two nipples located in the region of the groin.

The Aye Aye is a nocturnal and arboreal animal meaning that it spends most of its life high in the trees. Although they are known to come down to the ground on occasion, Aye Ayes sleep, eat, travel and mate in the trees and are most commonly found close to the canopy.

It climbs trees by making successive vertical leaps, much like a squirrel. Horizontal movement is more difficult, but the aye-aye rarely descends to the ground to reach another tree. Instead, they jump horizontally from tree to tree, and can often cover up to 2.5 miles (4km) in an average night.

Outside of mating, males and females interact only occasionally, usually while foraging. Though foraging is mostly solitary, they will occasionally forage in groups. Individual movements within the group are coordinated using both vocalisations and scent signals.

During the day Aye Ayes sleep in spherical nests in the forks of tree branches that are constructed out of leaves, branches and vines before emerging after dark to begin their hunt for food. Up to 80% of the night is spent foraging in the canopy, separated by occasional rest periods.

The aye-aye commonly eats animal matter, nuts, insect larvae, fruits, nectar, seeds, and fungi, classifying it as an omnivore. Aye-ayes are particularly fond of ceramicist beetles. Its teeth are efficient tools for gaining access to the meat of coconuts, while the long middle finger is used to drain the water. It picks fruit off trees as it moves through the canopy, often barely stopping to do so.

An aye-aye will eat coconuts, mangoes, sugar cane, lychees and eggs from villages. Some research suggests that aye-ayes prefer sap and vegetables to most insects.

The aye-aye is classically considered 'solitary' as they have not been observed to groom each other. However, recent research suggests it is more social than once thought. The home ranges of males often overlap, and the males can be very social with each other. Female home ranges never overlap, though a male's home range often overlaps that of several females.

The aye-aye lives primarily on the east coast of Madagascar. Its natural habitat is rainforest or ayes, the most common, dwell in canopy areas, and are usually sighted upwards of 700 meters altitude.

Regular scent marking with their cheeks and neck is how aye-ayes let others know of their presence and repel intruders from their territory.

Like many other prosimians, the female aye-aye is dominant to the male. They are not typically monogamous, and will often challenge each other for mates. Male aye-ayes are very assertive during the mating season, and sometimes even pull other males away from a female during mating.

Males are normally locked to females during mating in sessions that may last up to an hour.

Aye-Ayes are an endangered species

The aye-aye was thought to be extinct in 1933, but was rediscovered in 1957. Nine individuals were transported to Nosy Mangabe, an island near Maroantsetra off eastern Madagascar, in 1966. Recent research shows the aye-aye is more widespread than was previously thought, and its conservation status was changed to Endangered in 2014.

The conservation of this species has been aided by captive breeding, primarily at the Duke Lemur Center in Durham, North Carolina. This center has been influential in keeping, researching and breeding aye-ayes and other lemurs. They have sent multiple teams to capture lemurs in Madagascar and have since created captive breeding groups for their lemurs.

The Duke Lemur Center was responsible for the first aye-aye born into captivity, Blue Devil, and studied how he and the other aye-aye infants born at the center developed through infancy. They have also revolutionized the understanding of the aye-aye diet. 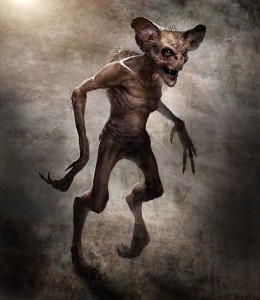 The aye-aye is a near-threatened species not only because its habitat is being destroyed, but also due to native superstition. Besides being a general nuisance in villages, ancient Malagasy legend said the Aye-aye was a symbol of death.

The aye-aye is often viewed as a harbinger of evil and killed on sight. Others believe, if one points its narrowest finger at someone, they are marked for death. Some say the appearance of an aye-aye in a village predicts the death of a villager, and the only way to prevent this is to kill it. The Sakalava people go so far as to claim aye-ayes sneak into houses through the thatched roofs and murder the sleeping occupants by using their middle finger to puncture the victim's aorta.

Incidents of aye-aye killings increase every year as its forest habitats are destroyed and it is forced to raid plantations and villages. Because of the superstition surrounding it, this often ends in death because superstitious villagers will kill it on sight.