Secrets of the Crystal Skulls

Secrets of the Crystal Skulls

Eighty years of exploration and study reveal the secrets of the Crystal Skulls, maybe. In 1924, the famed British banker-turned-adventurer F.A. Mitchell-Hedges led an expedition deep into the Central American jungles of British Honduras (now Belize).

His mission: to find evidence of the lost continent of Atlantis. But it was Mitchell-Hedges’ adopted daughter, Anna, who made a find for which this quest was to become famous. 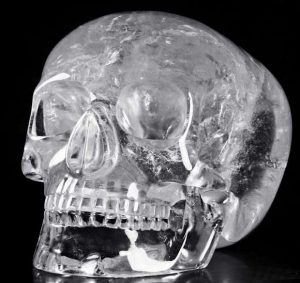 On Anna’s 17th birthday, as Mitchell-Hedges and his crew were excavating the ancient ruins of a Mayan temple at Lubaantun, Anna spied an object glinting in the soil under a collapsed altar: a beautiful sculpted human skull carved with uncanny craftsmanship out of a single block of translucent quartz crystal.

When she first touched the crystal skull, Anna reported experiencing strange sensations. And any time she placed the skull near her bed at night, she reported vivid dreams of the Mayan Indians who had lived thousands of years ago, and of their everyday life and ritual sacrifices.

According to the few remaining Indians in the area, she said, the skull had been used by the high priest of that culture to will death. Her father asserted the skull was 3,600 years old and dubbed it “The Skull of Doom,” because of its supposed supernatural powers and the misfortune that befell those who handled it.

News of the startling discovery caused a sensation in the art and antiquities world.

Subsequently, a number of other crystal skulls surfaced, some of which found their way into museums around the world, while others have remained in private ownership. To this day, speculation about the origins of these artifacts ranges far and wide.

Some say the skulls are relics of Atlantis and may have been wrought by space aliens. Believers maintain they are matrices of radiant psychic energy with the power to cast spells, conjure spirits, cure illness and foretell the future. In many hypotheses, the number 13 features prominently.

One such theory maintains that the skulls were left behind by a society that lived at the hollow center of the Earth, and that 13 “master skulls“ contain the history of these people.

Others theorize that each of the 13 master skulls has a specific property, and that bringing all 13 together will make all these abilities available to everyone at once, thus ushering in a new age. Most of the other crystal skulls that rose to fame after Mitchell-Hedges announced his discovery are of a more stylized structure, with teeth etched onto a single skull piece, as opposed to the Mitchell-Hedges skull which had a detachable lower jaw.

Two well-known skulls in private collections are nicknamed “Max” and “ET.” Max, also known as the Texas Crystal Skull, reportedly passed from a Tibetan healer to JoAnn Parks of Houston in the early 1980s. The skull gained its nickname after Parks claimed the skull told her its name was Max. The E.T. skull — so named because its pointed cranium and exaggerated overbite make it resemble the skull of an alien — is part of a private collection belonging to Joke van Dieten Maasland, who claims the skull helped heal her of a brain tumor.

The only crystal skull with a comparable level of craftsmanship to the Mitchell-Hedges skull is the Rose Quartz Crystal Skull, which also includes a removable jaw, but is slightly larger and not translucent.

But the Mitchell-Hedges skull — weighing 11.7 pounds and standing 5 inches high, 7 inches long and 5 inches wide — remains most famous to this day. 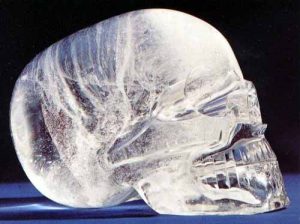 In 1970, the Mitchell-Hedges family reportedly loaned the skull for testing to Hewlett-Packard Laboratories — a leading facility for crystal research in Santa Clara, California. The testing produced some startling findings, according to Frank Dorland, an art restorer who claims to have overseen the examinations.

He reported that HP researchers found that the skull had been carved against the natural axis of the crystal. Modern crystal sculptors always take into account the axis, or orientation of the crystal’s molecular symmetry, because carving “against the grain” causes the crystal to shatter — even with the use of lasers and other high-tech cutting methods. Furthermore, Dorland claimed, HP could find none of the microscopic scratches on the crystal typically caused by carving with metal instruments.

This led Dorland to hypothesize that the skull was roughly hewn with diamonds, with the detail work being done with a gentle solution of silicon sand and water– a near-impossible task he estimated would have required up to 300 years in man hours to complete.

Dorland also claimed the skull originated in Atlantis and had been carried around by the Knights Templar during the Crusades. But there is no documented evidence to support the claims of the skull’s exotic origins and some authorities have claimed that Mitchell-Hedges purchased the skull at an auction at Sotheby’s in London in 1943 — an allegation supported by documents at the British Museum, which reportedly had bid against him for the artifact.

That would also explain why Mitchell-Hedges apparently never spoke of the skull before 1943 — even though he claimed Anna had found it nearly 20 years earlier. However, Mitchell-Hedges claimed he was actually buying back the skull after leaving it in the care of a friend, who put it up for sale at Sotheby’s.

There is also some doubt as to whether the tests at Hewlett-Packard were ever carried out, since no evidence of such testing has been provided by the company. Furthermore, later tests determined that the skull was carved using 19th century jeweler’s tools, making its supposed pre-Columbian origin even more dubious.

But Anna Mitchell-Hedges, who possessed the skull until her death in 2007 at the age of 100, stood by her father’s story and was loyally supported by others who are convinced that the crystal skulls possess important mystical powers.