Freshwater fish are fish that spend some or all of their lives in fresh water. Freshwater fish live in rivers and lakes with a salinity of less than 0.05%.

Freshwater fish differ physiologically from salt water fish in several respects. Their gills must be able to diffuse dissolved gasses while keeping the salts in the body fluids inside.

Their scales reduce water diffusion through the skin and freshwater fish that have lost too many scales will die. They also have well developed kidneys to reclaim salts from body fluids before excretion.

Fresh water fish keeping, or fish collecting, is a popular pastime. People have kept fish for thousands of years with an increasing popularity today due to T.V. shows like Animal Planet's Tanked (a favorite of this author!). Usually viewed as the less expensive side of the hobby, keeping fresh-water fish can be relaxing and entertaining while providing conversation topics, atmosphere, and visual centerpieces to many interior and exterior decoration.

Ancient Sumarians as well as Egyptians kept fish alive in ponds and pools so they would be fresh before cooking, keeping colorful or tamer ones as pets. From a novice collecting goldfish to an established fish collector, fresh-water fish keeping has something for everyone. 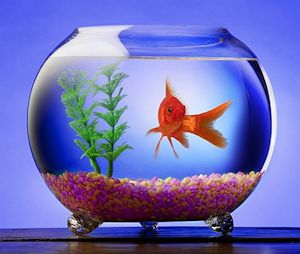 Fresh-water aquarist's have an advantage on cost with fish being readily available starting with a basic 'comet' goldfish for under $1.00 (u.s.). The real cost for the beginning fish-keeper is the habitat or aquarium. Depending on the aquarium you choose, it may be as little as $10 with prices going up from there. Inside your new aquarium, you will need gravel or sand or a similar medium for the bottom, which serves as decoration and depending on your set up may also serve as part of the filtration and aeration systems.

This is commonly referred to as aquarium substrate, and there are many colors, sizes, and material to choose from. Depending on the type of fish and the number of fish in the tank, an aeration system is usually needed.

These systems replenish oxygen in the water as the smaller surface of the water and lack of motion prevents adequate re-oxygenation (process that increases the oxygen density in the water) which of course the fish need to live. 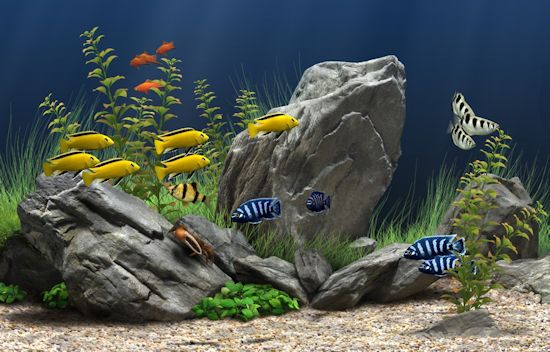 Another necessity is a thermometer. Many fish can only survive between certain temperatures and knowing what temperature your tank's water is at is imperative. Some fish like goldfish can stand extreme temperature swings and do not require one, while others like tropical fish have a narrower temperature tolerance.

With the thermometer in place and fish chosen, the aquarist may install a heater. There are many different heaters, and I suggest that a heater with a thermostat be chosen by the beginner. This is a 'set it and forget it' design, providing a fairly consistent temperature for the fish.

Most enthusiasts use a lid on their tanks, many with a light built into it, to help keep unwanted items (or animals) from falling or getting into the water. Lids with lights increase the brightness in the tank, showing off fish colors more succinctly.

Lids or tops also helps to decrease the amount of water lost to evaporation, heat loss, and provide a finished look to the fish tank. A cleaning or filtration system is used to clean up uneaten food, waste products, and any algae that may grow. A cleaning system may be a simple syphon done by hand every week or two all the way to a circulating pump with filter outside of the tank.

Attention and care should be taken to keep a clean, clear tank. If the tank is not going to be viewed from all sides, many fish collectors choose to place a back drop either behind the tank or on the tank itself. With many to choose from like simple contact paper, a picture behind the tank, or static cling versions of backdrops, an aquarist can choose from a desert scene, to a coral reef, a sunken ship, and more. 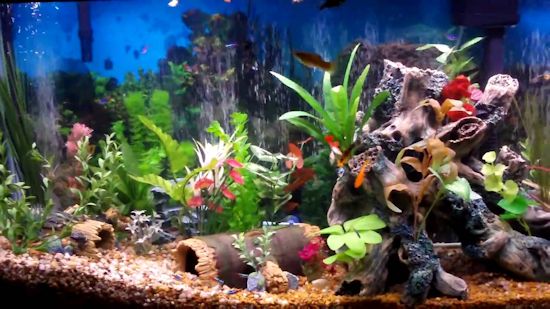 A New fish tank may seem bare with just some gravel or sand in the bottom so decorations in the tank add another personal touch. From treasure chests to coral reefs, there are many ceramic, plaster, plastic, metal decorations, and live plants.

Care needs to be taken that the decorations are properly sealed to prevent potential contamination.