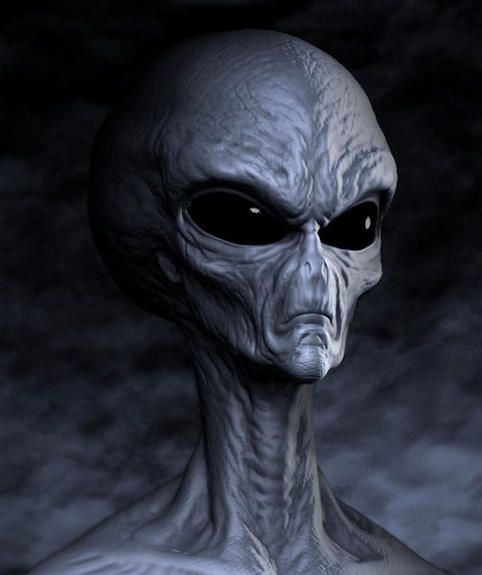 The Greys are small neo-saurian hominoids, very prolific and intelligent. May be the ’brains’ or ’intellect’ of the serpent race, whereas the larger ’Reptoids’ allegedly act as the PHYSICAL overlords and thus are of a higher ’ranking’ than the Greys. The Greys are logic-based and operate on base animal survival or predatory instincts and in most cases are emotionally insensitive to humans, and like other reptilian entities they ’feed’ off of human and animal vital fluids by rubbing a ’liquid protein’ formula on their bodies, which is then absorbed through the skin. Like typical reptiles which shed their skins the ’waste’ is excreted back through the skin. The Greys range from 3 1/2 to 4 1/2 ft. tall on the average, with skin colors ranging from gray-white to grey-brown to gray-green to grey-blue. Aside from feeding off of human and animal proteins and fluids, they also allegedly feed off the ’life energy’, the ’vital essence’ or ’soul energy’ of humans as do other reptilian species. This is why those humans seen working with the Greys (implanted and programmed ’drones’, whether willingly or unwillingly) have appeared ’lifeless’ and ’emotionless’ to the witnesses who observed them. The Greys are reportedly EXTREMELY deceitful and although they act on ’logic’, to them it is ’logical’ to use extremely complex forms of deception to bring about their goals. They are the most commonly observed ’alien’ entities encountered during UFO events. They are using this planet as a supply depot, for biological materials (people and cattle mutilations.) They are very telepathic in nature. Our world is not the only world they have tried to conquer. The Grays from Zeta Reticuli have the ability to magnify their mental field in order to maintain control over humans. These different species of Grays are members of a network which is a type of loose alliance to which all have common purposes and aims.

The Greys from Rigel were the ones that made the secret deal with the US Government.

They are impregnating human females on a massive scale, and later extracting the fetuses. Most of their biological materials comes from the cattle mutilation. However it s a known fact that at times they have done human mutilations. These materials have been found on their crashed UFO crafts. There are some books on the market saying that they are our friends, and that we agreed to these abductions. We are here to tell you not to believe it for a second. These beings are very disturbed beings and are here to take over this planet for their own selfish purposes. They look at us in a similar way that the unconscious mass of our society looks at animals. The Zeta Reticulans appear to be divided into two different groups. There is one group that appears to be a little more tolerant towards human beings. The other group is interested in colonization and conquest of planet Earth. The Greys have one base near the Aleutian Islands. The Greys seem to have influence over the Reticulans and the Beeletrax species of Grays. These Greys have no stomach and digest their food by absorption through the skin or under their tongue. They have been cloning themselves instead of the practice of reproduction we use on Earth. Each time they reclone, however, the genetic copy becomes weaker, which is part of their problem. Their attitude towards humans is tolerance towards inferiors. They are technologically superior, however, spiritually and socially backwards.

How to protect yourself from greys and reptilian aliens

The specific aim of the Reptilians and the Greys is to take over planet Earth through covert mind control methods, much like the Illuminati and Secret Government is trying to do on Earth. Here are some tips on how to protect yourself.