The clown loach is one of the most readily available fish in the aquarium trade for freshwater aquariums. It’s bright orange and black striped body brings color to any tank. Being a peaceful fish, the clown loach gets along with almost any tank mate.

Chromobotia macracanthus, commonly known as the Clown Loach, is a tropical freshwater fish belonging to the botiid loach family. It is the sole member of the Chromobotia genus. 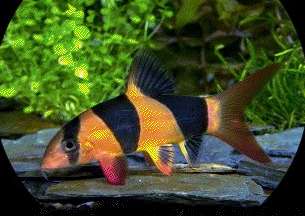 The clown loach was first described as Cobitis macracanthus by Pieter Bleeker in 1852. In 1989, its scientific name was changed to Botia macracanthus.In 2004, Dr. Maurice Kottelat divided the Botia genus, containing 47 different species, into seven separate genera, resulting in the clown loach being placed in a genus of its own, Chromobotia.

The common name, “clown loach” comes from the fish’s bright colors and stripes (many tropical fish with stripes that stand out are commonly called “clown”) as well as from its habit of entertaining’ aquarium owners with strange habits. Sometimes clown loaches swim on their sides, or upside down, and appear ill, or lie on their sides on the bottom of the tank and appear to be dead. This is normal behaviour so the aquarist should be aware of it to avoid removing healthy fish from the aquarium.

The clown loach originates in inland waters in Indonesia on the islands of Sumatra and Borneo. Clear stream environments provide the optimal habitat for clown loaches, but biannual monsoon flooding forces the fish to move into flooded flood plains, or murky or blackwater rivers or lakes, for 7–8 months of the year, and clown loaches are commonly found in the flood plains of hilly areas.

The Clown Loach is sometimes referred to as a scaleless fish. But it does, in fact, have small scales embedded in its skin.

It has two bifurcated suboccular spines over the eyes that are folded under the skin. It raises them for defense or when disturbed in some way. Great care must be taken when moving clown loaches, and all Botiine loaches, because the spines can catch in the net and damage the fish or the handler. Also, when transporting this species, multiple bags must be used to avoid punctures from these spines.

This loach is a toothless fish that has no teeth in it’s mouth. Instead, it has pharyngeal teeth inside its throat to grind it’s food.

It has several barbels around its mouth that can easily be damaged by sharp objects. Sharp gravel and rocks such as lava rock should not be used in their aquarium.

Clown loaches have been known to live more than 40 years, some sources even say 50 years.

This peaceful loach gets along with most tank mates. They make excellent additions to a large community tank if the focus of the tank is their needs first. They seldom bother even small fish and it is quite possible to have other species breed and the babies grow up without being eaten by the Clowns.

However, they should not be placed in a tank with a species known to be agressive, or they will bully the loaches and stress them out. Clown loaches should be kept in schools of at least 5, but 7 or 9 is even better. The more, the better. Large tanks can have fifty or more.

When kept in groups smaller than five, clown loaches may spend lots of time hiding under obstacles in the water. Tiger barbs and panda corydoras associate happily with clown loaches, and the three species may school together.

A group will establish a “pecking order” and there will be an Alpha Loach, most often a female, that will lead the group. At times, fights may break out and often lead to scratches and nicks on the fish because the suboccular spines may mark the other fish. In healthy fish in a well-maintained aquarium, these are of little consequence and will heal rapidly. During disputes, Clowns may change colour considerably, a state known as “graying out.”

Clowns will engage every so often in a behaviour called “Loach-dancing.” The whole group may tumble over one another in a vertically oriented, rotating group that will maintain this behaviour for quite a long time. Newly introduced groups of fish to an unfamiliar setting may act like this for a couple of days after introduction. They will also do this when they are excited, such as right before feeding time.

Another strange behaviour, common to most Botiine Loaches, is the habit of sleeping in weird places and at weird attitudes. A new owner may be disturbed to find the fish laying on its side or upside down, often under some decor or in a cave structure. This is natural behaviour for this fish.

Clown loaches are regarded as a poor choice for the beginner aquarist despite their wide availability in fish shops. They are highly susceptible to Ichthyophthirius (ich),or white spot disease, if great care is not given to their acclimation or environment maintenance. They must be watched closely when initially introducing them to a tank and when new fish are added.

It is suggested that the aquarium be designed around their requirements specifically, rather than them being added to an unsuitable environment. Due to having small or few scales, a reduced dosage may be required when using certain types of medication, possibly reducing the effectiveness of the medicine.

Sharp ornaments, gravel and rocks such as lava rock should be avoided. These can easily damage the delicate sensory barbel around the mouth, and if they get sores, then they are very susceptible to white spot developing.

A 50 gallon tank may do when they are small, but due to their potentially large mature size and fast growth, they will need a 75 to 120 gallon (283 to 454 litre) aquarium within a few years. This fish quickly grows to 5″ (12.7cm) before growth slows down. Adults will eventually require an aquarium measuring at least 6’ x 2’ x 2’. Even small specimens of this species must initially be housed in an aquarium that is 4ft long as a minimum. Anything smaller can cause these fast-swimming fish to become stunted and stressed. Adults are very powerful fish and require a great deal of swimming space – the footprint of the tank is always more important than the height.

An open swimming area should be included in your aquarium, as these fish often enjoy swimming the length of the tank and back in their shoals, usually in the evening, or under further subdued lighting, such as a blue moon tube. Always remember to keep the hood tightly covered, as all loaches are expert jumpers.

Your aquarium should be set up for several months and already contain other fish before introducing clown loaches. You should turn off your aquarium lights while acclimatising your loaches, to minimise stress. Once acclimatised and released into the tank, you should leave the lights off for several hours more, in order to allow them to explore their new surroundings in relative darkness.

In its native habitat, this fish is found in water with a temperature range of 77 to 86 °F (25 to 30 °C), a pH between 5.0 and 8.0, and water hardness between 5 and 12 dH. Because they are native to fast moving streams, water aeration is extremely important. They require large turnover, efficient filtration systems and current supplied by additional power-heads, frequent water-changes and great attention to cleanliness in the aquarium. The water must be low in nitrates, clean and well oxygenated.

You should aim for at least two partial changes per week, removing and replacing a total of twenty-five percent total tank volume weekly, at the minimum. Botiine loaches will appreciate a good flow in the aquarium, which can be provided by spray bar returns from external filters or via the use of additional powerheads. This will mimic their natural environment of moderately fast flowing rivers and streams.

The tank should have subdued lighting, a soft, preferably sand substrate, and numerous hiding places provided made from rock-work or driftwood. They especially like smooth river rocks from a fast moving stream that doesn’t allow algae to grow on them. They like to sleep on or under these rocks, sometimes upside down.

Plants should be strong and resilient because large clown loaches can be hard on them. They may uproot them, or punch holes in the leaves. Plant species must be capable of low-light environments. Microsorium pteropus (Java fern) and Anubias species seem to last the longest.

Clowns are somewhat nocturanal in nature and often very lively in the early morning and after dusk. The addition of a blue moon light tube, or some other form of blue lighting, phased to come on before the main lights, and go off after them, will allow the owner to observe the fish at their most liveliest and entertaining. This will also avoid the fish being shocked by a sudden change in brightness.

A variety of food should be provided for clown loaches. Most clown loaches accept commercial flake food and sinking pellets as their dietary staple, but thrive with a variety of food: live worms, brine shrimp, and small snails; banana, cucumber, melons, zucchini squash, and other plant matter, freeze-dried tubifex worms, especially if it is fortified, and frozen mosquito larvae (their favorite) or brine shrimp (always thaw frozen food to aquarium temperature). You can chop up small salad shrimp as a treat. The clown loach is a voracious eater of nuisance snails that sneak into your aquarium on live plants, but if you are buying fish to clean out a snail infestation, there are smaller loaches that are better suited for that purpose.

In a community tank other fish may take the food before it reaches the bottom, where clown loaches normally feed. However, with a tank supported with natural environments, clowns are very noisy surface feeders who will assert themselves to take the most and the best of bloodworm. Bloodworms are a very rich food and should be fed sparingly. Clown loaches make clicking noises when they are excited or during feeding. This sound is produced by the grinding of their pharyngeal teeth, which are found in the throat instead of the mouth.

For best care, feed the clown loach small meals several times throughout the day, at least three times per day. The most important feeding is the one at the end of the day when the lights go out – not all will be confident enough to venture out until the light levels are reduced. Younger specimens will eat most prepared foods while older ones may be more finicky.

Clown loaches aren’t sexually mature until they are several years old and over 7″ (17.78cm) long. There are no verified records of natural captive breeding, although there have been a few unsubstantiated claims of successful captive breeding. Some commercial enterprises have successfully bred them in captivity using hormone enhancement, particularly in the Czech Republic.