The Bengal Loach can be a little territorial and they do argue amongst themselves from time to time, but in a moderately boisterous tank containing medium sized barbs or deep-bodied tetras etc, they should do well. 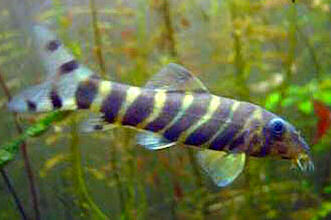 Bengal Loaches have been reported to reach up to six inches (15 cm) in their native streams of India and Bangladesh, but in captivity most specimens reach four to five inches (10-12cm).