Clown loaches are able to change their coloration based on mood, aggression, possibly stress and other factors, sometimes for prolonged periods. This is referred to as “graying out” and often occurs during mock fights between Clowns.

These fights, which are referred to as “sparring”, are used to determine the natural pecking order within a group of clownfish. Serious injuries can, but seldom do, occur as a result of these “fights” which are more often than not just bluffing behaviour. 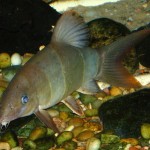 Clown fish can change from regular coloration to “gray” quite quickly, particularly at feeding time, when many squabbles break out. Depending on your tank lighting, this color change may show a kind of greenish, metallic sheen to the whole body, most noticeable over the stripes. The edges of the stripes tend to have a paler area than the rest of the stripe. Color changes extend into the fins. 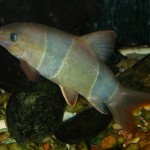 Often when sparring is about to commence, the clown loach will assume a position with the tail slightly down and the fins spread. This position is a posturing behaviour and makes the fish appear larger and hopefully will intimidate the other fish before a fight actually breaks out. 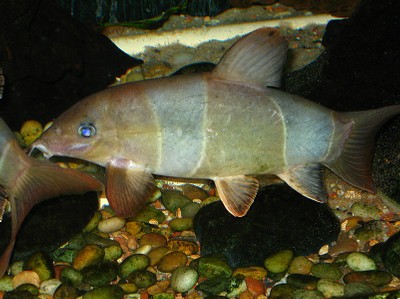 Increased oxygen is needed during fight.

Note the fish’s open mouth in the picture on left. Respiration rate increases dramatically during these fights due to an increased need for oxygen. The spread fins is a typical pose, possibly to make the fish look larger and more intimidating. 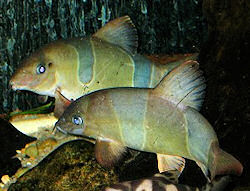 The clown loaches will posture beside one another in an attempt to make the other fish back down without actual physical combat. 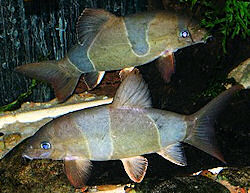 Alpha fish has the most graying out.

The Alpha fish will usually be noticeably further from the normal coloration than the other clown loach. 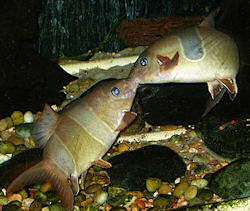 Eventually, the clown fish may rush at one another and lock jaws momentarily. This is a trial of strength.

This may be followed with more bumping and biting (below). 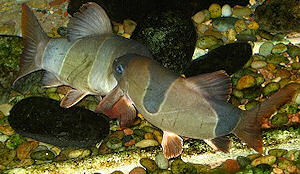 Note the front fish is now somewhat closer to normal in color. This is a sign that it is losing the battle and about to back down from the conflict.

At this point, the conflict is almost over.